Alpha 2.5 of chapter 3 for patrons 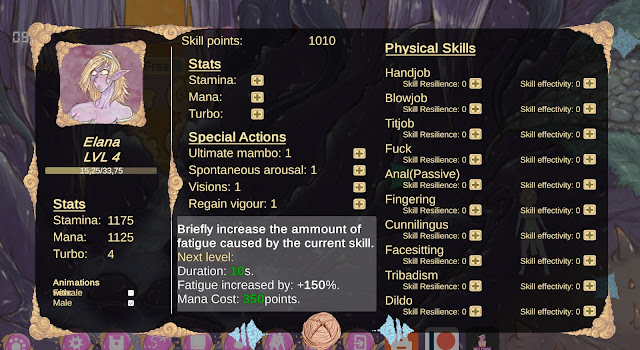 New version with combat included! It will need some polish, some balancing and mechanics to actually be a threat to the academy but all features are already here. During next week we'll post our plans for next release but now... The updates! Hope you'll enjoy it! Updates: · Fixed the possibility to stop the time and the academy. · Added a small tutorial to explain the management of the teachers and their skills and some fixes but is still a work in progress. · Added a button to advance time in Jane's office in the academy. · The main menu has been adapted and now includes a button to access a log for the academy updates and the combat menu, where you can purchase and upgrade the skills for the combat, select against which genders of enemies you want to see in the fight animations with particular characters (Show animations for both male and female, show always as if the characters is fighting with a female or always as fighting against a male), and manage the combat party. · Added the combat with Elana, the Spirit, Hanna, Christie and Belladona as fighters with 75+ animations. · Added sound for most of those animations. · Added a debug code for influenced maga/nobles and above tiers to unlock all characters for the combat with 1000 skill points for each other. https://www.patreon.com/posts/35899764 · There is a text tutorial which can be consulted anytime in the combat but this are roughly the mechanics: You select an enemy, a fighter and a physical skill to start the fight, and the goal is to leave the opponent without stamina. While you still have capacity to activate the turbo you can do so to increase the speed, increasing the stamina consumption for both fighters. If the special skills are purchased you can also perform those skills for a magic cost any time if they are ready (they have cooldown) with a wide range of effects. Keep in mind that those skills can fail while they are not leveled up. Also keep in mind that those enemies can have different behaviours (such as changing preferences, immune to turbos, extra toughness...) which now will be explained the first time you encounter therm. You win the fight if all enemies reach climax before your party. · Added a combat ending scene showing the experience earned for the characters and if they level up. · The combat is activated after completing Jane's world (in future will be after Dystopia). After completing it or using the button to skip it the event that will start it appears if you enter and exit the academy, with an event that contains another animation. After it, you'll find different enemy ragdolls around Jane's world to start battles with different amount, types and levels of enemies. In future there will be three types of enemy parties: places where always appear enemies with increasing level, enemies who block areas and disappear after being defeated and enemies who walks towards the academy. · You start the combat with Elana and the Spirit but as mentioned you can get 3 more fighters. Christie will appear in a area of a completed world (she should appear with futa appearance or not deppending on the choices of their dialog events but, if you skip Jane's world with the button, there is chances that appears with one or the other. In future we'll try to add a feature in the combat menu to change it since she mentions in the event that she can control it), Hanna will appear in the academy after the first fight but after talking to her, she will appear in another area of a completed world (Click on her is a little buggy but if you click a little around her ragdoll the event will start without much problem) and Belladona will appear in the academy ready to join the party after completing Show towns. · Added ragdolls for the destruction spawns and Hanna. · Added Hanna's avatar and the avatars of some old friends. · Added an event for Aly and Lily in the academy after completing Show towns. Known bugs and notes: · The Spirit in the inventory and the teachers images in their data sheets in the teachers rooms appear as white rectangles. · For some reason the portrait of the first enemy you select for the battle changes its gender. · Some texts fore the lessons are still not implemented or are not correct. · Some students can appear in a classroom where there is no lesson at that time. · Hanna's ragdoll is a little difficult to click in the event to get her for the combat. · Even if you start a new game the characters will still keep their level for the combat. · The climax animation for Belladona is a little buggy. · Thea change resolution tool doesn't work well and touch it can misalign the elements of the game. · Since we are working on changing the size of the game the images of the events appear in low resolution. · The third level of Spirit's sex sense skill only activates when you select him instead of at the beginning of the combat. · Many adjustments for the faces of the dialogue needs to be done. · If you skip jane's world the arrow to go to the sadness area from the love area, doesn't appear. · The rooster who sings to announce the change of the day, sings whenever he wants.